It’s another #TastyTuesday and this week I’m serving up Banoffee Pie. As with many of the British desserts I’ve posted here, if you are at all concerned with your cholesterol level, walk away now. Trust me, a little banoffee pie goes a long way.

Banoffee is very popular in the UK and you’ll find some variation of a banoffee dessert in pubs and restaurants all over the country. Banoffee cheesecake, cupcakes, tarts, sundaes . . . you get the idea.

This recipe is from my sister-in-law’s mother-in-law and it is delicious. Let me know if you make it and what you think! 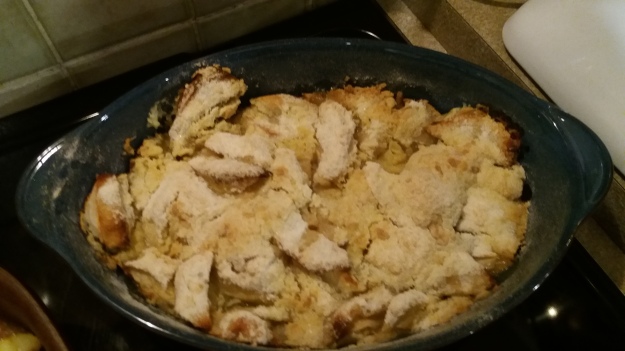 So… I’ve been experiencing some technical difficulties here at expatrimummy, hence the lack of posting, and though the issues aren’t quite ironed out I expect they will be soon. Stay tuned.

In the meantime, how about a Tasty Tuesday on Friday? Today we’re making apple crumble–an easy classic British dessert, similar to an American apple crisp, but probably with way more butter and sugar involved.

I don’t follow a specific recipe; my mother-in-law taught me how to make this many years ago before we were in-laws at all. It’s simple and a great comfort food for a cold winter’s night.

As many cooking apples (peeled, cored and sliced) as will fit into your chosen baking dish.
Equal parts white flour, white sugar, and about half as much butter (I generally use a cup of flour and sugar and either add more if I need it or freeze the excess).

You can vary this by adding sugar to the apples if they’re particularly tart, or cinnamon, or add cinnamon to the topping or use brown sugar instead of white. My mother-in-law frequently adds blackberries to the apples if she’s got them to hand. Make it your own or enjoy as is. Serve it with ice cream or custard (we don’t make our own custard from scratch; we use Bird’s Custard Powder made up with milk and sugar in the microwave). 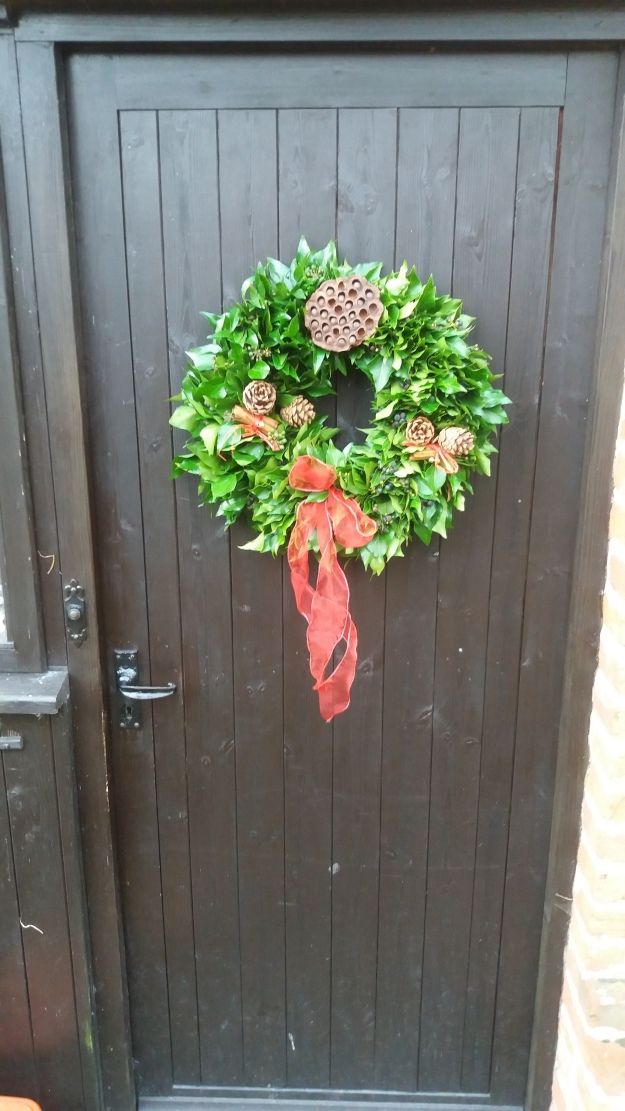 Merry Christmas, from our back door to yours.

Today’s recipe is another repeat from a few years ago—hope you enjoy it!

It’s a marvelous thing to see on Christmas day, after it has been steamed for a few hours, doused with brandy and set alight before bringing it to the table. When my nephews were a wee bit smaller than they are now (let’s just say they are much, much taller than I am these days), their eyes would grow to saucer-size at the sight of a dessert actually on fire. But no way were they going to eat it.

This is another Christmas tradition that can be made months in advance, ideally six. (No, that has never been managed in my household.) Much like the Christmas fruitcake, full of dried raisins, cranberries, cherries, figs, whatever you like (no scary candied fruits, please!), some cloves, a few eggs, some nutmeg, a bit of flour, brown sugar, bread crumbs, butter, ginger, and most important, the booze: 1/2 cup of rum and 1/3 cup of cognac or brandy. (Though you don’t necessarily need to use both.) Steam for about two hours.

On the day, you steam it again for another 45 minutes or so, douse it in brandy, and set it alight. Usually served with a side of brandy butter: butter, sugar, and brandy all mixed together. My husband has also always been in charge of that particular mix, and all I know is it’s equal parts butter and sugar with as much brandy as the mix can take. Good luck.